Making Money With Android App - Income Report for May 2015

My monthly Android income report is here. Sorry for the delay in reporting. I had to shut down this blog for some reason but now it's back online and I'm back to sharing my stats of what I made through my android app endeavors. I'll be updating the domain of this app soon in order to lure in more viewers cause frankly I understand this domain name is totally not good. Anyways to the main deal now. May has been good for me I crossed my target of making $120 in one month and got an overall increase of $10.

Compared to that last month, the stats have increased overall. My CPC has improved to 0.09$/ click. CPC is the cost per click. It's the average money I make per click on my Admob ad. Pageviews have improved as well along with the no. of clicks. It's a gradual rise in my stats but the best part is it's totally passive money and I didn't have to do a thing to make except to keep my apps updated. I intend to roll in more updates as I want to keep my users engage.

So, here is how I made my first $120 through my android app. Please keep visiting this blog every week for more stats. 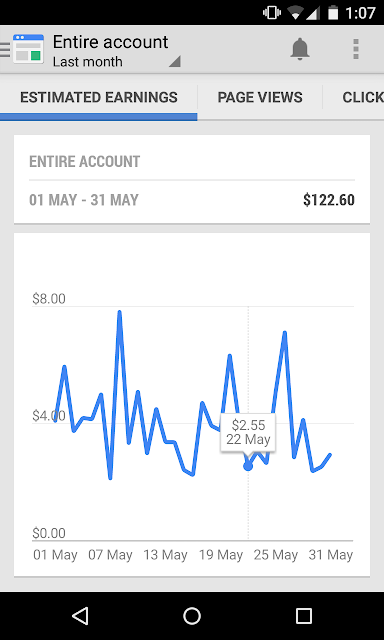 For more stats on how I make money with my android app, read on.
Read more »
at 01:19 No comments:


The third week has been proved to very good when it comes to improvement of stats. Despite a drop in the 2nd week things are back on the upside. In total, I got an overall improved stats to share with you guys.

I also rolled out the new update for my main app improvising the overall user experience. I'm expecting the downloads to boost up a bit this month. There isn't much difference in the stats but I got two good days where I made $6 and $5 respectively and that boosted the overall earnings this week.

My 1 Year Experience of Making Money with Android app

I got my first app made in July 2014. I outsourced it. Initially, it was a very casual quotations application. For first 3 months, I didn't really promote the app and the download were way less. it was after doing some SEO and keywords related work and also some app tweeking that I was finally able to make it rise up in rankings. After almost 4 months, in October 2014, I started making a few cents and dollars from my app. After the fourth update and some major improvements to over all structure, the app sky rocketed for few days with hundreds of downloads.

This is my second week report in the Android income series that I'm writing about how I'm making total passive money with my android application. It has been six months since I launched my app. In the beginning I didn't really bother about promoting it or even updating it but after seeing the potential in the market and the incentive of total passive money, I invested some time and money to pursuit this endeavor.

Uptil now it has been a successful one. My app is getting reasonable 50-70 downloads per day and I have started making a modest $100 per month. It's not much but frankly I would accept it as long as it's coming without even making a single effort.

How I make total Passive money with my Android Applications

I have been reading a lot about passive money making and passive income but almost everyone talks only about how you can make passive income from a website (which is totally untrue). So, today I have decided to write this article on what true passive income is. Unlike other bloggers who consider blogging as a source of passive income, I believe that it's totally ridiculous. In order to make good money from blogging you have to work daily in writing new content and then marketing your blog to increase its readership.

That was the reason I left blogging in the first place cause it was a lot of hardwork and I was looking for some type of an monetary investment rather than time investment. After seeing how app owners earn and make money from their apps, I decided to pursue this line and uptill now I'm very glad that I left blogging for App development. P.S this blog is only for educating others and for now I have no intention to monetize it heavily.

As you may know, I have just started this blog to share my weekly android income with others. In order to elaborate my income stats a bit more, I have decided to start a new series of articles in which I will show you guys my average earnings over a specific time period.

The CPC for the month of April is comparatively better than last two months and with more clicks and impressions my earnings are steadily increasing. I'm not trying to rush things out and I'm satisfied with Admob only for now. I remember trying out Revmob advertisements for Android but I got notifications from Google play regarding clash of policy with RevMob ads so have to remove those.


This blog is meant for showcasing my earnings through 1 Android App that I launched a few months ago and is now earning me a decent $100 per month. It's decent start as it's a totally passive income and I literally have to do nothing but to keep a look out on my Admob account.

Based on this little success of my first android app, I have decided to share my weekly income reports with all those android developers who intend to launch their own android app. My income is totally based on Admob as I'm not really finding any time to use any new mobile advertisements for now.

So for this week of 15th - 21st April. My android income is as follows. Remember making money with android requires time and a lot of luck cause the success of an app depends entirely on how you maintain your marketing strategy.